Fault dispute over car turning into me 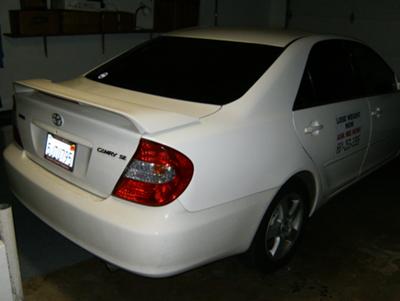 Car 1: (Mine) is going north on R Ave. Three lanes, but conditions only show two obviously. Car 1 is in far right lane, which appeared to be larger lane and turns into gas station at about 10 miles an hour.

Traffic was only on driver's side when the turn was made. Car 2 beeps about 5 seconds prior to crashing into Car 1, which by now was 3/4th into gas station, with partial rare door and bumper damage. Car 1 stops immediately, after which Car 2 pulls into gas station next to Car 1.

Car 2 driver exclaimed that it was "a good thing Car 1 wasn't going any faster" which was puzzling since it either turned right just as Car 1 made the turn into gas station or was coming north in same direction of Car 1 but wasn't paying attention and made no attemp to stop.

Car 2 convinces insurance that Car 1 "hit her", although she drove her vehicle into Car 1 and sustained damages in front end, while Car 1 has damages on rear right door, tire and bumper. Car 1 did not hit anything.

Their explanation is that Car 1 pulled over illegally into her and the letter from insurance company claims Car 1 was in "improper position for right turn" and so is 100% at fault. I believe this is wrong. I did not cause her to drive into my car. All three mirrors indicated no traffic when I made the turn (I used both mirrors and looked over the shoulder with indicator on).

If the damage to my car is the edge of passenger rear door and tire to bumper and it's a 2004 Toyota Camry..not a large car to say I was turned across traffic. She drove a chrysler coupe. At any rate, both drivers have obligation to "look out".

I believe she was distracted...had car with two others and listening to ipod and talking on phone. If I was "going faster", I would have been at the pump instead of slightly hanging over the driveway and she would not have hit me. If she "saw me make an improper turn"

She had opportunity and obligation to break and/or do whatever she could to avoid an accident. Two stupid moves don't make one smart.

I did not make an improper turn, although not on the "sidewalk" when I made the turn. People dash across the street or cut us off all the time or break suddenly infront or something...it is the person who rear ends that was following too closely, hence at fault rather then the person who stopped suddenly.

If I made the same turn and she was startled and hit a tree or something else, she would have been at fault. I do not believe my making a right turn is the cause of her slamming into my car and I am very interested in the causation effect of this "negligence".

This will be the first accident and first point in my 20+ years of driving in at least 3 different countries.I was the only person in my car and 3 in theirs and no injuries. The woman's son was screaming at her the she hit me, but she wasn't listening to him....drama.

Titled: After Weeks of "No Fault" Insurance Sends letter claiming 100% fault when someone hit my car. I am appealing, but need to support it.

You have a problem here: the damages seem to support the other side. You have damages to your side, which would indicate an improper lane change. It’s hard to tell from your picture, but usually, the Car 2 hit you, you should have a hit (solid) as opposed of a scratch.

Where Car 2 damage exactly? On the front or on the side? This will affect the decision of negligence.

Regarding causation, the fact that she beeped could help her case. Car 2 was paying attention because they honked. Sure, it could have been a late reaction, however, her duty to avoid might have been fulfilled (she has a duty to try to avoid – even if she is not successful doing so.

For what say, it sounds like she came and hit you, however, you will have to show that with evidence (a witness would be very helpful here).

We believe you are correct regarding negligence. It is very possible here that both parties are at fault. If the impact was at a slow rate (can judge the amount of damages to both vehicles), the she would have been able to avoid by simply applying the breaks gently.

You want your insurance company helping you defend as you strongly believe you are not at fault. They can help investigate and maybe get a witness (maybe a video from the gas station?