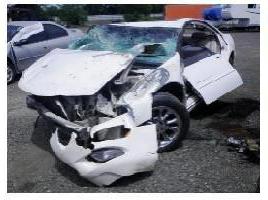 The failure to effectively teach safe driving practices to the younger generation is to blame for the high teen fatality rate.

Limited driving experience along with a lot of distractions (such as talking while driving and being on the phone while driving) is the root of the auto collisions involving teens. It is with experience in driving that people become better judges of distance allowances, traffic behavior and of speed – experience that teen drivers lack.

Laws that are especially written to prevent the increasing number of teen driving-related deaths include preventing newly-licensed teens from driving with passengers.

Teenagers are disallowed by law to drive with passengers within the first few months of being given their driver's license.

Distraction from a passenger in a car is one of the major causes of teen auto accidents.

The age group ranging from 15 years to 20 years has the most number of deaths when it comes to car accidents.

Another preventive action the government has against this is disallowing teens from driving at night and from driving with non-family passengers until after the first few months of having their licenses.

Although the government has enacted laws to restrict the driving privileges of teens, these are not as effective in keeping teenage car accidents from happening. Most parents nowadays do not obey the law as strictly as they should.

Laws have been strengthened and punishments have been made more severe just to reduce the number of teens who drive when intoxicated. Not to mention that teens belong to a demographic that is under the legal age for drinking.

Driving at night is another major cause of teen deaths in the country. It makes up around 20 percent of the total fatalities.

It may be a little lower than that from teenage drunk driving but statistics show that more than 50 percent of teen car accidents resulting to death occur at night. More and more states are now starting to enforce laws that keep teens from being behind the wheels at night.

The government cannot enforce ethics or responsible driving to teenagers.

All the state can do is just to actively inform the public of the scary statistics of deaths from teen car accidents and the ways to prevent the numbers from increasing. The most effort against irresponsible teen driving must come from the household.