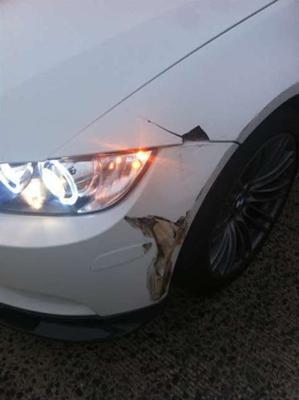 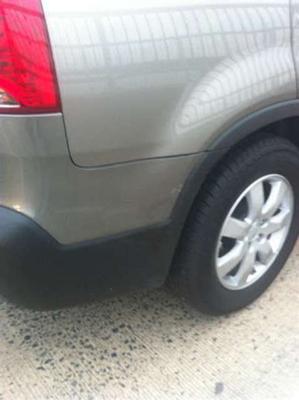 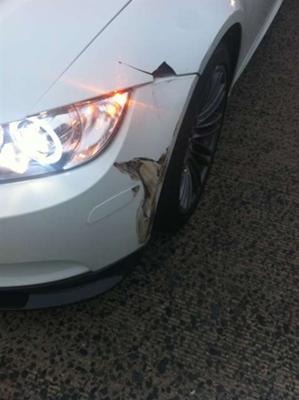 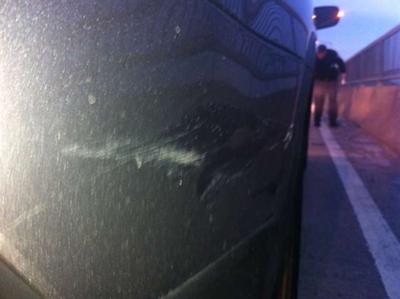 I was traveling on the right lane of a four lane freeway during rush hour. The driver directly beside me began to merge into me and I held my horn. That driver acknowledged my horn and began to go back into her lane (lane 3) Immediately, she swerved right into me and I applied the brakes as it was happening.

I was hit on my driver's side fender near the headlights.

Her damage was minimal but the point of impact was at her passenger rear wheel and quarter panel.

She proceeded to leave the scene of the accident and I pursued her and stopped her. I called the police and she told the police that she didn't know she hit me.
No police citation was provided because there was not injury.

She took 5 days before she contacted her insurance company to submit a statement.

Her statement said that I held my horn when I was behind her and claims that we were both attempting to merge into the same lane at the same time. She acknowledged it and went back to lane 3. Then she accuses me for speeding up and hitting her rear passenger wheel with my front fender.

Her insurance company denies my claim against hers because they cannot find sufficient evidence to rule out either story. Please see the pictures attached and let me know what your opinion is. We will be going into arbitration after my car is repaired.

I actually had to chase her down from leaving the scene, and she told the cop that she didn't know she hit me. . I am attempting to get a statement from that police officer to submit. The driver told her insurance that she didn't stop because she was looking for a safe place to pull over.


Well, that stinks. Usually the police report will try to put fault on someone, and that should be enough evidence for an insurance company. It will definitely help the arbitrator make a decision.

That will be the key piece of evidence.