Struck by an open door in a parking lot 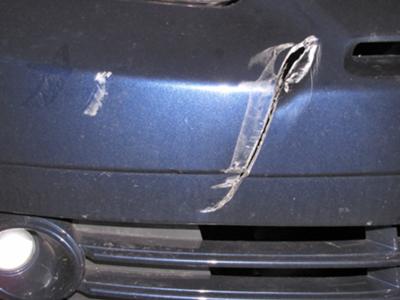 Notice the white horizontal scrapes from her opening her door 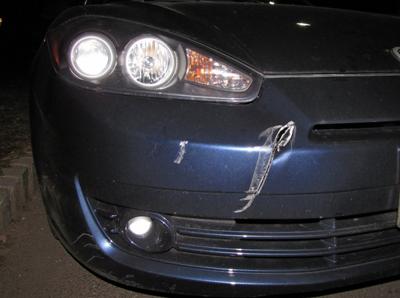 I got in to a minor accident the other night. I was pulling into a parking spot. There was a Rav4 to the right of me with the engine running. As I was pulling in the woman turned off her car n flung her door open. The bottom of her door scratched into my front right bumper (my car is low) as soon as I felt that scrape and saw her I braked and the door then "stabbed" in to my bumper stopping the door in motion (see photo). So then I got out of the car and the woman started yelling "didn’t you see my car was on, you should have known I was going to get out soon".

I calmly said "Ma'm how am I supposed to know if you are coming or going or waiting for someone? You should have looked before you opened your door so fast". The police came, the officer asked me what happened. I told him I was parking and she flung her door in to my path. I didn’t think I needed to say anymore as I was under the impression that if you open your door in front of a car that your fault!

I picked up the police report and the cop's diagram shows my car diaginally driving in to the side of her vehicle and states the woman told him that her door was already open 6 inches and I drove in to her open door. I was also marked off as "inattentive driver". I was not ticketed. Had I known she claimed her door was open I would have told the cop that it was not and she admitted to me her car was on when i was pulling in. I called my adjuster immediately and was informed that this police report put me at 100% fault. She then told me that even though the cops report doesn’t look like it matches the damage photos of my car there wasnt much she could do but try to accept 50% of the fault and hope the ladys insurance agrees.

I called the cop and asked him to explain his report to me. He told me the scale does not have an option to show an open door. So the diagram isn’t accurate but its the best way he can describe where the point of impact was.

When I questioned him about the "inattentive" remark he stated thats automatic because I am in a moving vehicle and shes wasnt, its my duty to yield to her. This makes sense...however she didnt open her door until I was already halfway in the spot. There was no possible way for me to magically move my car sideways. I stepped on my breaks I saw what was happening. He said that his report is just for documentation purposes and by no means should determine fault because he wasnt there and didnt see what happened, its the adjusters jobs to examine damage and figure that out. I felt like he wasnt listening to me and was blowing me off.

He refuses to amend his report. My adjusters telling me different and his report has ruined my case.

So I’m freaking out now. What are my options here? Am I in the wrong? Im afraid my car rates are going to go up over this mess and I am going to be stuck paying a deductible for somthing I feel wasnt my fault.

Answer to Struck by an open door in a parking lot:

Well, that is clearly not a good situation. A police report is in fact evidence. The adjuster is worried, correctly, if she goes to arbitration, a third party arbitrator will be persuaded by the police report. What the police said / stated can really damage your case.

The only option is to get the police to amend the report, but as you saw, that it very hard if possible at all. At this point, you have to push your insurance company to do an independent investigation and see if they find more evidence (like a video of the parking lot) to see if they can refute that.

Other than that, you need to ask your adjuster to protect your interest. It is true that a vehicle parking has a high duty of look out, however, may states, and your adjuster can check on that, have state codes for vehicle opening / closing doors and loading and unloading passengers. There may be a good defense there.

As always, it is a good idea you talk to an attorney.